Headed to Philadelphia and New York City for a week on the east coast with old friends and new (and work..).

An excuse to write off famous deli sandwiches on our taxes? Sign us up!

So, we headed to Philadelphia for the ASTRA Toy Faire. Turns out the show is very kid-oriented and while many buyers wanted our goods for their own use, they thought it too risky to stock on store shelves along side sippy cups and crayons… Since when did the world get so PC??

A friend of ours took the sandwich quest very seriously. Never eaten 3 hoagies at 3 different restaurants in less than an hour before coming to Philly… 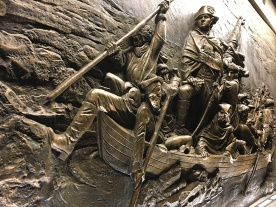 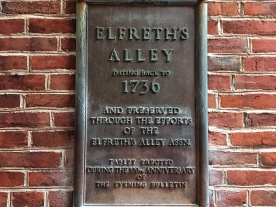 Hopped on a bus to NYC to pay a visit to Uncommon Goods, our longtime partner in commerce. Their office/warehouse is in a magnificent old army transport building in South Brooklyn that’s been decommissioned since the 50s and since re-purposed for a variety of businesses from chocolate factories to an alleged Counter Terrorism outpost. Deliciously scandalous. 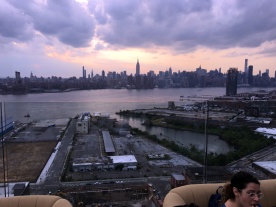 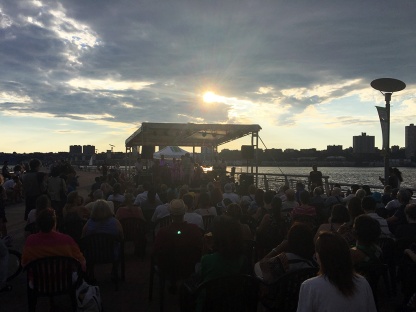 Like all memorable trips, we met awesome people along the way and would like to say a special thank you to Marisa Bowe, a writer with UG, for taking us out to an incredible Williamsburg rooftop view of Manhattan (and getting us to the front of the elevator line)!

Fidget Spinners, Kendamas, and Murder Mysteries entertained weekend shoppers at the grand opening of a new Games by James store in the Ridgedale Mall in Minnetonka, MN featuring local game designers and inventors.

Special thanks to the Mindware booth for lending their youthful and enthusiastic staff to keep the MBP challenges rolling all afternoon and GBJ for including us in the showcase! 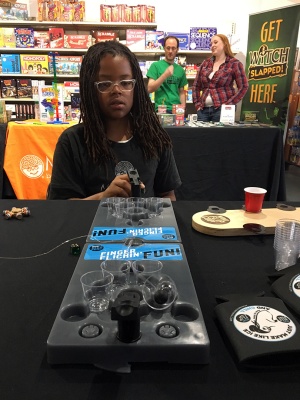 And they say Chi City! Okay, no Kanye, but there was plenty of Windy City Brews at the Chicago Beer Festival held at Soldier Field.

We pitched a tent and did our best to anchor it down on a frigid afternoon challenging festival goers to a drinking game duel on their way out of the stadium.

Also had a blast smashing space debris with our neighbor’s virtual reality headsets. Check out Reality Bytes – super fun, especially with a couple beers in you! 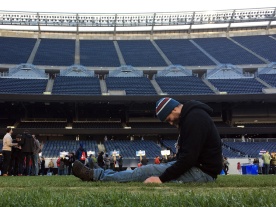 What started out as a side-hustle is now a full-time gig for two of us, and we’re pumped to dedicate our time toward developing fun new ways to waste time 🙂

Thanks immensely for your support over the years! We have another new game under development that’s going to take you back to high school graduation… Sign up below to be the first to check it out! Cheers!

Mini (Beer) Pong is coming to a Target near your in Summer 2016 in partnership with Buffalo Games!

We’ve always been proud to handcraft each Mini Beer Pong set at our shop in Minneapolis. Yet, after a couple years of cash-strapped side-hustling, we’ve struggled to keep up with unexpected surges in demand and scale our mini operation efficiently.

Having just invested tens of thousands of dollars in designing and launching production of our lower-cost travel sets and been hoping to connect with a large retail buyer at one of these trade shows to give us the ability to increase our manufacturing volume and lower our prices. Alas, we hadn’t been able to link up yet…

Out of the blue, we get a call from New York-based Buffalo Games to pitch Mini Beer Pong to a games buyer at Target with no strings attached. Turns out the buyer loved the game and was ready to order 30,000 some units, but he wanted

This caught us by surprise and and really threw a wrench at our plans. On the plus side, with a retail partner like hometown Target and their distribution network, it’s a major opportunity to take our business to the next level and free up our time to focus on creating new games. That, plus the need to still maintain separate full-time day jobs to pay bills led us to sign the agreement for a Feb 2016 debut at the New York Toy Faire. 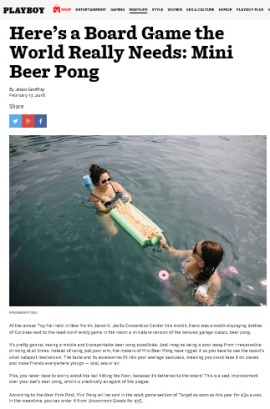 Aside from Target, you can expect to see Mini Pong on shelves at a bunch of other stores towards the end of the year, so who keep your eyes pealed!

Plus, if you like MBP, you’re going to love our next product – due out in late 2016. Another college classic coming back with an adult twist… Sign up below for a heads up, Cheers!

Hey! Thanks for your patience. Happy to say the wait has been worth it – we came up with a new game!

Check out Mini Flip Cup, it’s a finger flippin’ fun relay game that will bring you right back to the house party in an adult fashion.

Limited amount available this year, so belly up if you feel like a party before the holidays!

It’s been a busy past few months at Scienz HQ at the North Pole, I mean Minnesota, as we’ve been stocking up for the holidays so we can go into hibernation once the first snow falls… If only.

Anyway, it occurred to us that we might be able to take some time lapsed shots of our production process to give you guys a behind the scenes look at the love that goes into each Mini Beer Pong set at hyper-speed. Enjoy.

For more snapshots of production in action, tag along on Instagram.

Last but not least, a zillion thank you’s to everyone who has and will scoop one of these up! Your support and enthusiasm mean the world. Pong on!

Gotta love stumbling upon a Hemp Fest during your trade show lunch break. Makes for an easy afternoon 🙂

The technical reason for our journey was to exhibit at another Urban Expositions gift trade show being held at the Washington Convention Center (which is a spectacle of a structure with an incredible amount of natural light).

Made some great connections and met some really cool store owners. Ironically, in Washington of all places, we smoked alcohol for the first time. Best stick to convention… Many thanks to Laurie Block of Elope who kept us well nourished with homemade sandwiches and solicited passerbys to our booth.

Also, in case you didn’t know, Washingtonians love the Seahawks. 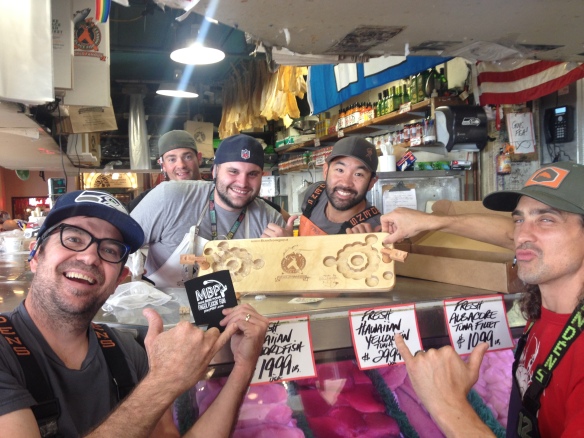 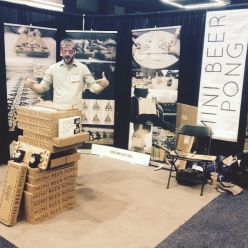 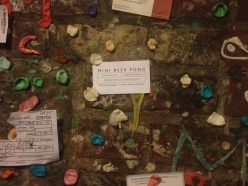 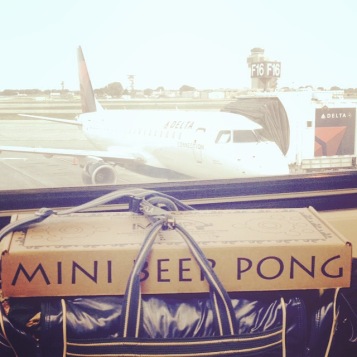 A few trip highlights (not necessarily with photographic evidence):

– rooftop beers 1 block from the Amazon headquarters at our friend’s $3,800/mo studio apartment while discussing how Amazon is the new Wal-Mart; bro, thank you for making that opportunity possible

– purchasing another Starbucks before finishing the previous Starbucks

– the city itself – awesome public parks and awe-striking geography

Conclusion: the PNW is the ideal place to live in the US; better migrate fast before everyone else does! (or has already..)

California dreamin’ finally came true as we headed out to LA for the California Gift Show hosted by Urban Expositions at the LA Convention Center.

The vibrancy in LALA land is tough to beat. So many people out away from home taking risks trying to pave an unconventional path in life. But this electricity is perfectly tempered by good, relaxed Cali vibes. It seemingly has the best of both worlds if only it didn’t cost so much to live anywhere close to the beach and car traffic didn’t exist…

Purchasing representatives from retail outlets and vendors converged, and business went down. Check out a few pix of the experience below. 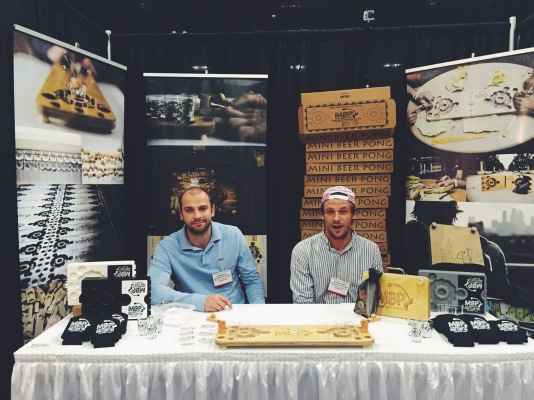 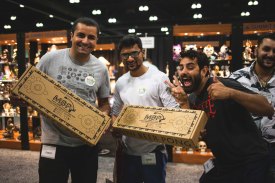 Playing on plane with Surly Furious 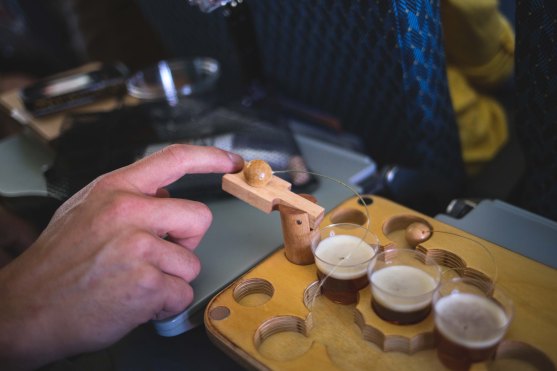 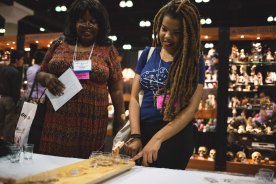 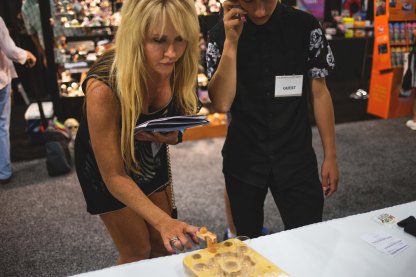 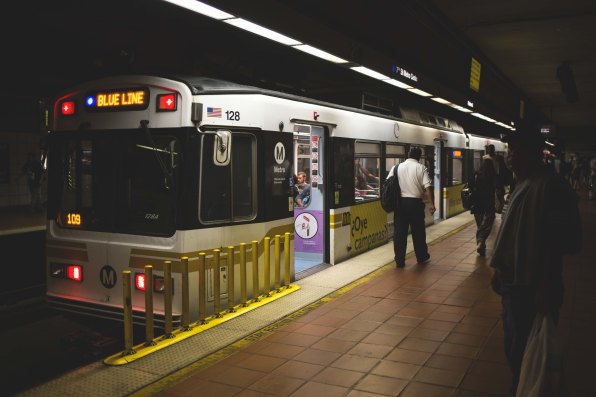 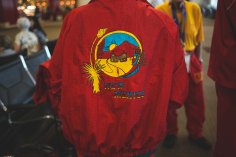 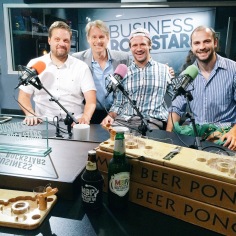 Derek and Sam on Business Rockstars 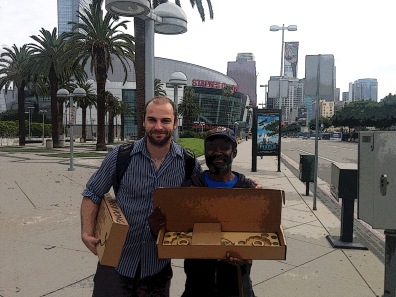 A few trip highlights (not necessarily with photographic evidence):

– meeting the Senior Olympic Women’s Basketball team from New Mexico in the MSP airport; these women are our super heroes

Finally, you’re welcome for bringing the rain, LA, at least for a couple days..

We’ve heard from day 1… “You should try out for Shark Tank!” Well, we did.

We’ve heard from day 1… “You should try out for Shark Tank!” Well, we did.

An open casting call happened to be held at our alma matter, so we swung in, gave our pitch, and got a call back the next day.

The casting agent then requested we make a video pitch for the producers, so we did the best we could with 1 night and limited camera battery…

Coincidentally, we received a call from a casting agent for an NBC show a few weeks later for a lesser well known show. We’ll see wassup wit dat wassup… Top notch performance skills must be hard to ignore!!